Protecting koala populations through habitat regeneration - private landowners have the power. Every tree makes a difference.

Daily spotting started in November 2014, but for ease of reference data is only referenced from January 2015 so that complete years of data can be compared.

an alpha male who ruled over 25% of the property.

Clinger was a mature alpha when he was first identified in December 2014, and was the first koala definitely identified using nose pattern recognition. He had such an easily recognised nose pattern too, making him a great starting point.

He was an important part of the colony and would have been contributing genetically to several generations in the colony at the least. He was seen the highest number of times on the property out of all the koalas with 111 sightings, or roughly one day in every three.

Clinger was widely popular on facebook, quickly becoming the ‘face’ of Koala Gardens. He was the first koala to begin to earnestly investigate the benefits of tasting the young trees in their early years, and the photos and video of him working his way through inspired Koala Gardens intense interest in koala behaviour, as Clinger seemed to be breaking a lot of ‘rules’.

He was last seen on the property looking healthy in November 2015, so we have no way of telling what may have happened to him. 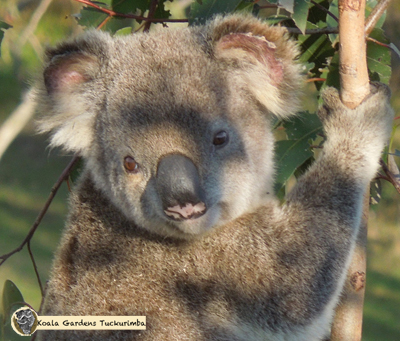 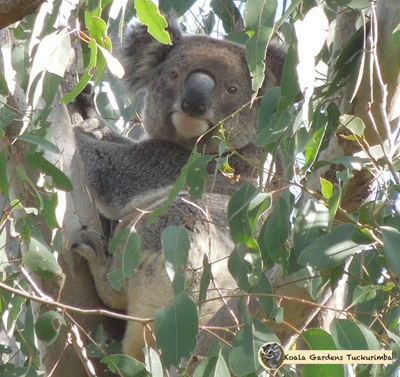 an alpha male who rules over 65% of the property.

Each alpha male has his own home range which he will defend from other males competing for breeding rights. However, more than one alpha male will have home ranges within an entire colony area.
This is why you can see 3 males here identified as ‘alpha’, but they each use their own home range areas while being considered part of the same colony.

Jordan is a mature alpha but possibly had just come into maturity in 2015. Male koalas are not fully mature until they are around 4 years old, but may begin to breed by 3 years old.

Jordan has very dark fur and nearly full nose pigmentation. He was sighted on the property 67 times.

a huge female koala that produced a healthy joey during 2015. She was so named because she was “BIG Bertha” and that is a real compliment for a koala as holding body condition and weight is not easy on the calorie-poor diet they have, especially when habitat is fragmented.

Bertha was sighted 39 times. Most of these sightings were while her joey was in her pouch and she left the property for a few months and returned with a lovely large and healthy joey.

She has not been seen since this time so it is impossible to know what has become of her and any progeny. 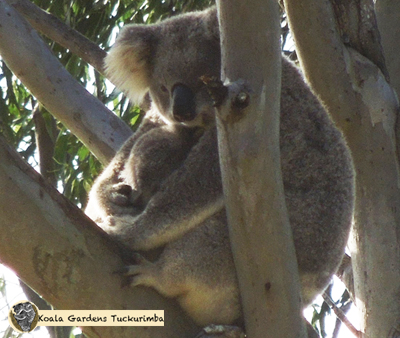 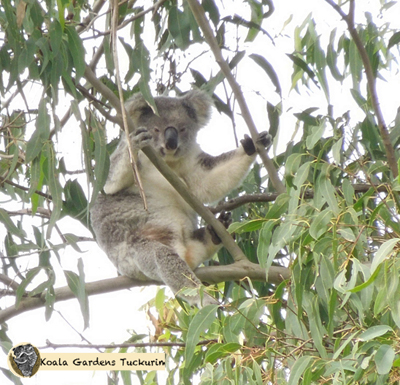 another large healthy female koala that arrived here with a joey in pouch around the same time as Bertha.

Corky’s joey was seen out of the pouch 5 times and was a healthy looking joey and she was settled as a mother.

Corky was sighted 36 times during just a couple of months. She left the property not long after joey emerged from the pouch.

She has not been seen since this time so it is impossible to know what has become of her and any progeny.

In 2015 she was only sighted 30 times, so we know that she has a well established home range that touches this property but has important trees outside of these boundaries.

Mist produced a joey in 2015 which was healthy and she stayed around the property at the end of the time her joey was in pouch and the first weeks that joey emerged.

She was then unsighted for 7 months until she returned. This made it very clear that data needs to be collected for a number of years (and 10 seemed to be a fair number to start) before any real patterns might be reliably identified. 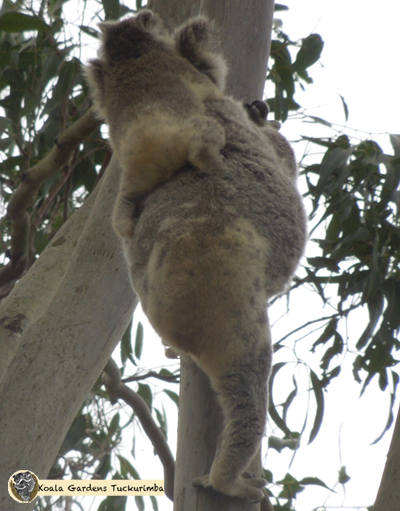 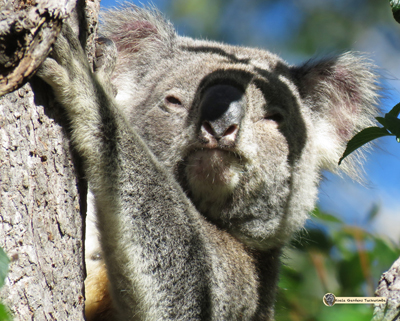 an alpha male who ruled over 10% of the property.

Zorro was a mature alpha when he was first identified in March 2015, so it can safely be presumed he was already breeding with females in the colony by this time.

This means that Zorro was a very important part of the colony as he contributed important genetic material.

During 2015 he was only identified on the property 18 times between March and September. This means that while he is an important part of the colony, his home range extends far beyond the boundaries of the Koala Gardens property.

was the first koala on the property that was obviously infected by Chlamydia. From the first sighting it could be seen that there was a real problem with her eyes even though she was always high up in mature trees. When she was a little lower we could see that her bottom was discoloured as well.

Even though she was only sighted 17 times, this was over a 6 week period and it was a stressful time of watching and waiting an opportunity to capture her so she could be checked by a veterinarian.

Finally she was in a younger tree and a rescue team came out from Friends of the Koala and we were successful in capturing her.

Tragically, not only was she completely blind, but the urinary and reproductive system involvement was extensive and she was beyond help of any treatments available and so she was humanely euthanased. 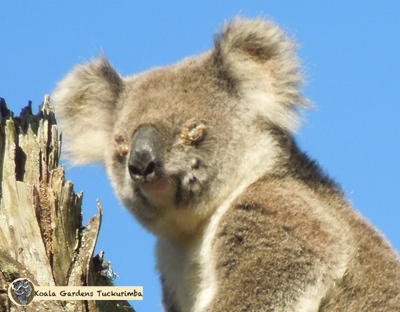 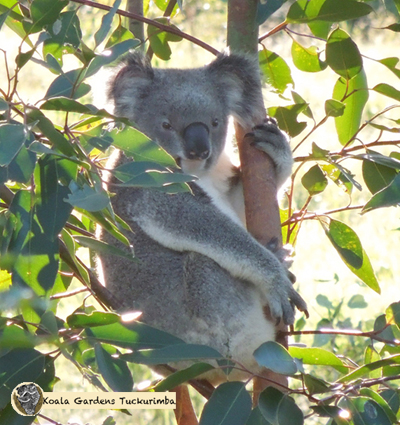 was probably a young male looking to settle into a home range. He was sighted a total of 19 times between December 2014 and July 2015.

Males have the hardest time securing a home range within a colony as they have to either take on a quiet life with no intention to breed (which certainly goes against nature in every way) or be able to establish themselves as an alpha which means either finding new habitat (which is a fantasy sadly) or fight for the right to take over an existing territory.

So it would seem that Tootsie may have come through the property several times while moving up and down searching.

was a young male, probably around 2 years old. He would have been looking for a home range to establish and settle into.

So it would seem that Dewy may have come through several times as he moved up and down the natural koala corridor searching. 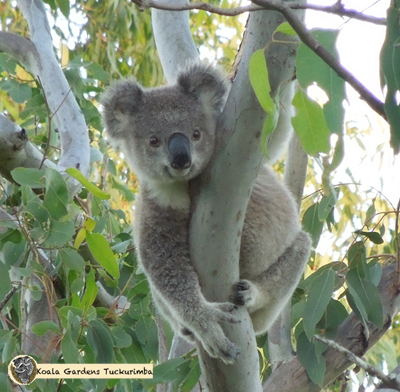 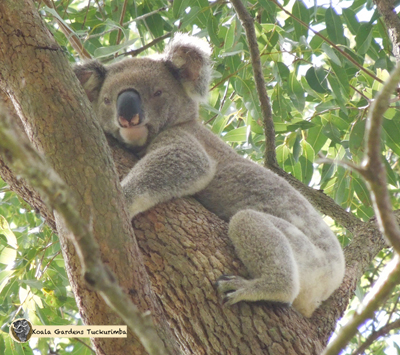 was probably a younger male (it is very hard to tell the age of a koala once they have achieved the basically mature size of around 6 – 7 kg without close examination).

He was sighted on the property 13 times during February 2015 and then came back through and was seen once in April.

was probably a young male, though he was a good size, that was looking to establish a home range.

He was sighted on the property twice during May and then 10 times over 3 weeks during June/July 2015 and was not seen again. 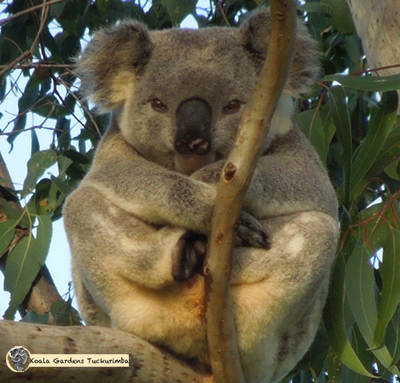 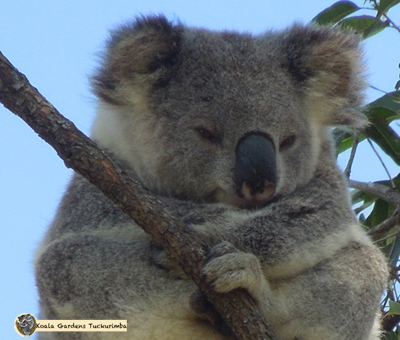 was a large, healthy appearing female.

She was sighted here 8 times during August/September 2015 and has not been seen again.

The reasons a mature female would be wandering a corridor seemingly in search of a new home are more complex as females are not so commonly displaced but it does happen. It could be as simple as important trees in her home range being cut down which is why people do not know what damage they are causing when they remove “just one or two trees”.

There is no way to tell if she successfully settled herself into a newhome range.

was a huge, healthy mum with a well-grown large joey.

She was sighted 6 days in a row in trees at the top of the gully, and then she was gone.

It is very possible she was looking for a place to ‘leave’ her joey as her joey was about the right size to become independent.

There is no way to tell what became of either of them. 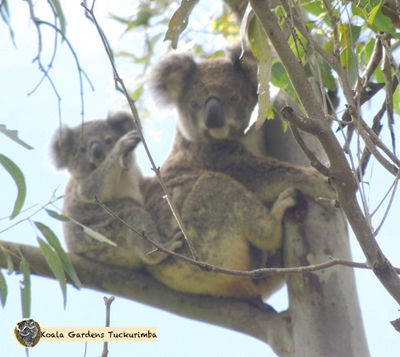 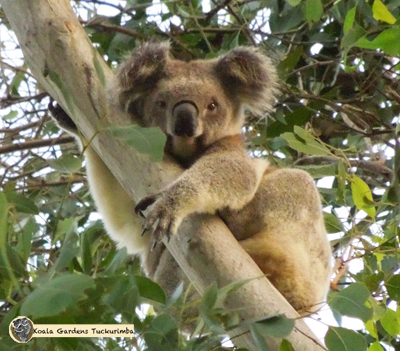 was probably a younger male that was looking to establish a home range.

He was sighted 6 times on the property. Of these sightings the first was a single sighting January, and the 5 days during April 2015.

while Lofty was only sighted 4 times during 2015, these were the last 4 days of the year and his story is told above in 2016.

He remains the worst case of cystitis caused by chlamydia infection that has been seen on the property. 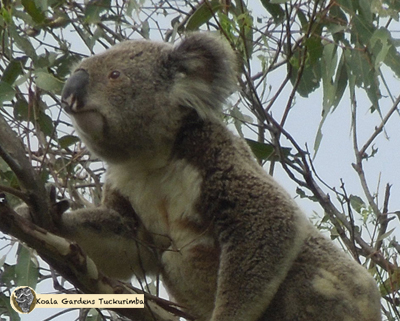 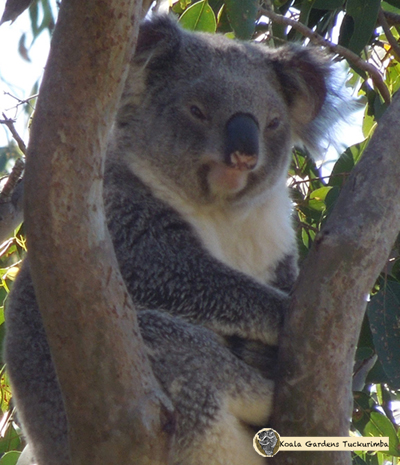 was a delightful huge female with regal bearing.

She was only sighted 3 times on the property during September/October 2015 and so was obviously moving through.

It was a little strange to see a mature female displaced and wandering, unless she had a home range very close by and was just checking a little outside her boundaries for better food.

There is no way to tell, if she was doing this, or on the move to find a home range.

He was sighted on the property just 2 days during March 2015.

He had a very dark colouring, much like the colouring of Jordan and Greta.

There is no way to tell if either of these, or other explanations, are the case. 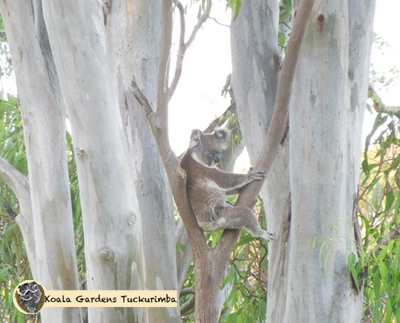 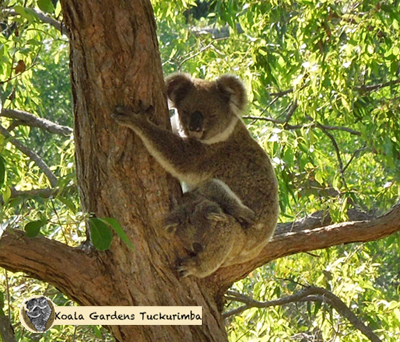 was a lovely mature female with a well grown joey.

It is possible she was looking for a good place to ‘leave’ her joey as her joey was about the right size to become independent.

She came to the property one day in May and was gone the following day.

There is no way to tell what became of either of them.